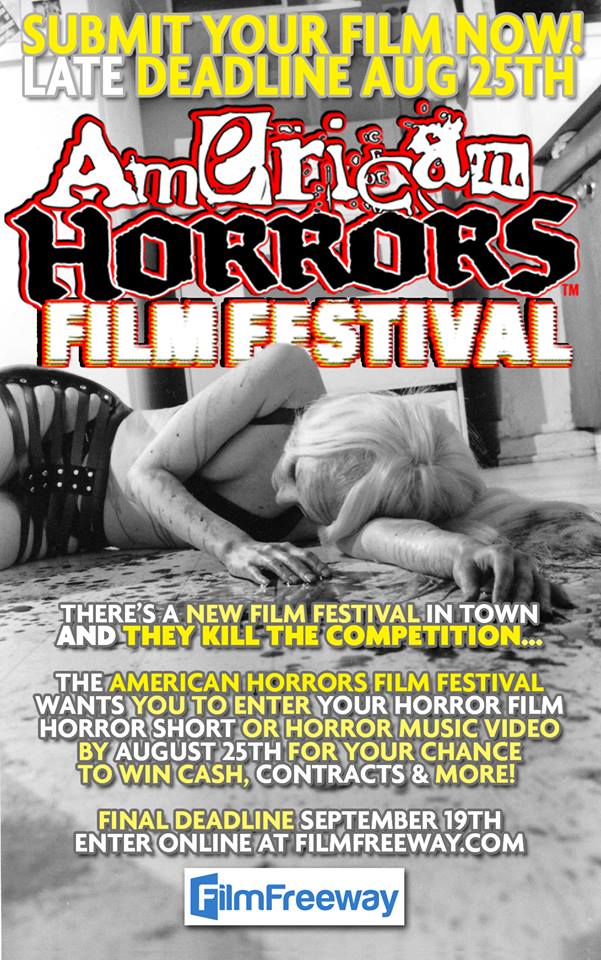 The Deadline for entering your horror feature, horror short or horror themed music video into The American Horrors Film Festival is fast approaching, get your entry in by August 25th to take advantage of the slashed entry fees (there was no rise in price from regular deadline to the late deadline and all student entry fees are discounted by 50%)!

All entries can be made online at: https://filmfreeway.com/festival/TheAmericanHorrorsFilmFestival

To make things even more interesting, The American Horrors Film Festival will have it’s red carpet (at the historic Geneva Theaters http://geneva4.com/ in downtown Lake Geneva) with it’s participants, panelists and audience members filmed for a tv special to be aired worldwide on the new American Horrors Roku channel (over 133,000 cumulative installs on Roku alone since October,2015) at the end of the year!

The Winners of Best Feature, Best Short & Best Music Video will win cash prizes, an (optional) contract to have their work air on the American Horrors channels worldwide, plus more crazy prizes TBA!

Both American Horrors channels are now available for free online at http://americanhorrors.com/ 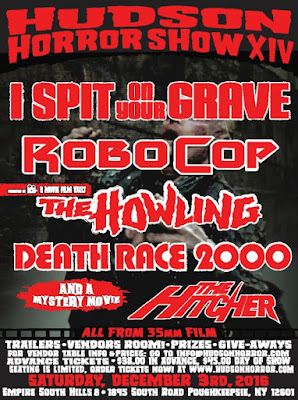 Hudson Horror Show #14, the Hudson Valley’s only 12-hour 35mm retro movie marathon will take place December 3rd, 2016 at the South Hills Cinema 8 in Poughkeepsie, NY. Limited tickets are on sale now and are just $38.00 in advance and only available at www.hudsonhorror.com. We’ll have six movies, all projected off 35mm film!

The show just got far more brutal as we are proud and well a little scared to let everyone know that the latest addition to our fall show is… 1978’s horror/exploitation classic I SPIT ON YOUR GRAVE!

Starring the beautiful Camille Keaton and produced and directed in 1978 by Meir Zarchi, this movie is so violent that it was still named by TIME in 2010 as one of their Top 10 Most Ridiculously Violent Movies ever! Critic Roger Ebert reviewed the movie and claimed it to be the “worst film ever made” and said that it was a “vile bag of garbage”. The vicious and stomach turning gang rape, the violent and brutal castration and murder scenes are so intense that the complete version of the film is still banned in England and Ireland to this day! Can YOU sit through it all?

We are very excited to be presenting a 30th anniversary screening of THE HITCHER! Three decades back this great little stalk and slash road picture didn’t make much of a splash at the box office, but it became a cable TV staple in the late 80’s and early 90’s. See Rutger Hauer and C. Thomas Howell (in whiteface) in their greatest roles!

The trailer at our last show was met with thunderous applause so we knew we had to track down one of the last know surviving film prints of the original DEATH RACE 2000! Forget the sanitized remake, nothing can compare to David Carradine, Sylvester Stallone and Mary Woronov running people over cross country in this futuristic sci fi classic!

Jordan Garren, that maniac from the B Movie Film Vault, presents one of our two fisted headliners, THE HOWLING! Directed by Joe Dante and starring Dee Wallace, Patrick Macnee and Robert Picardo, THE HOWLING still stands tall as one of the greatest werewolf movies of all time. The special effects of Rob Bottin always looked great on TV, but trust us; the transformation scenes need to be watched on the big screen!

Our second headliner also features the wizardry of the Maestro Rob Bottin and that is 1987’s ROBOCOP! Yeah, we know all of the sequels and remakes sucked, but Director Paul Verhoeven’s cyborg movie is a five star masterpiece! Seriously, this movie is damn near perfect. You’ll run out of the theater yelling lines like “I’ll buy that for a dollar”, “I work for Dick Jones” and “Your move Creep”!

We will also have the ever-enigmatic MYSTERY MOVIE!! Will it be a slasher classic? Maybe we will show another terrible rubber monster movie? We are keeping tight lipped on this one, but we will tell you that is definitely, 100% a horror movie!

As usual, the two lobbies at the theater will be packed to the gills with vendors selling t-shirts, DVD’s, toys, posters and so much more. Interested in being a vendor? Send us an email to info@hudsonhorror.com. Tickets are not needed to shop the vendor’s area, but you will need a ticket to watch the movies.

Just like the last few shows, we will be booked in two different rooms in the same movie theater. One room is already long sold out; tickets are moving fast for the other. It doesn’t matter which room you sit in because both rooms will see the same exact movies, just in a different order. Get your tickets now at www.hudsonhorror.com. Just $38.00 in advance for 12 hours of 35mm movie madness!

We will see you on December 3rd, 2016 for Hudson Horror Show #14! Tickets on sale now at www.hudsonhorror.com.
Posted by Dr Blood at 1:21 AM No comments: 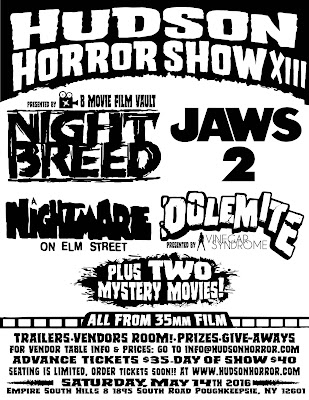