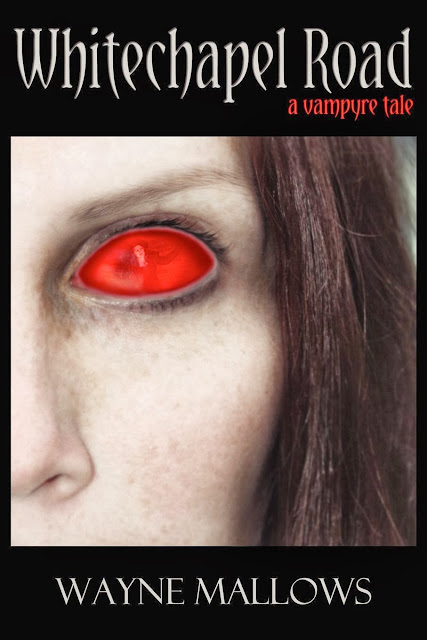 Review by Darkeva
$24.95
Available on Amazon


Whitechapel Road is a vampire novel by Niagara Falls resident Wayne Mallows that goes back to the 1800s and Victorian England in the good old days of Jack the Ripper, but in this version, vampires abound. Specifically, a female vampire named Mary who uses the patriarchal and often misogynistic belief systems of the times to her advantage as she runs amok in London, taunting the clueless police, but more than anyone, she taunts a man named Aremis who was engaged to a woman he thought was a simple, obedient (and human) sort of gal, but turns out that thanks to the old switcheroo, he gets bitten and turns into one of the foul creatures himself.
What’s unique about this tale isn’t so much the depictions of vampirism or even the notion of Victorian vampires, but it’s the element of mixing Jack the Ripper in there, and proposing the idea that perhaps our favourite Ripper was indeed not only a woman (an idea which has been explored in other novels and films), but also that she was of the fanged persuasion, which is new to me.
The story is written in an easy-to-follow style, and the plot will keep you turning the pages. Any fan of vampires, Jack the Ripper, Victorian fiction, or all of the above will definitely enjoy Mallows’ offering, which has great historical details and reveals the point of view of Aremis’ caring and kind-hearted sister, who gets the epistolary treatment in the form of diary entries written at the beginning of most of the beginning chapters, then we don’t hear from her again until the very end.
This is the perfect kind of thing to read as we’re approaching Halloween (then again, isn’t all horror? ;-)) but this book especially will give you a feeling that you’ve got a unique vampire novel in your hands, and will offer you some much-needed fresh blood ;-) (couldn’t resist)
-Darkeva-
Posted by Anita Eva at 8:54 PM