Horror movies seem to work out this way recently. They come up with a hook and make one good movie and they milk the hell out of it with 5 sequels. This film has lot of potential because it’s focusing on something new, the characters. Oculus highlights the people who are affected by the horror elements. The dedication to the classic horror format is a breath of fresh air. The building pressure and tension pays off in an enjoyable film. I give this a green light because it understands the suspenseful build up to horror. Now if you are looking for splatter porn or the jumps scares keep stepping. This horror is far more sinister. it manipulates your thoughts and your perceptions.

The story surrounds a woman’s desire to prove that she and her brother are not crazy. It has two time lines. In one of them, Kaylie (Karen Gillan) and her brother Tim (Brenton Thwaites) meet after Tim is released from a mental institute in today’s time. She works as an auctioneer and has been trying to find a mirror that she believes is alive and manipulating people into killing for its ghoulish pleasure. She finds it and tries to document the supernatural nature of the mirror before they destroy it. 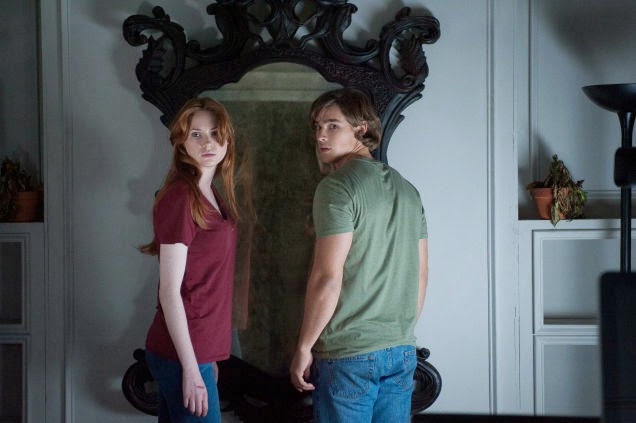 The other story line is young Kaylie (Annalise Basso) and Tim (Garrett Ryan) move into a new house. Their mother, Marie (Katee Sackhoff), and father, Alan (Rory Cochrane) purchase the mirror to give the house some refinement. Alan starts to spend a lot of time with the mirror in his home office and Marie thinks that Alan is having an affair. The evil of the mirror works on the little voice in your head that focuses on your insecurities. It amplifies the bad things that the voice whispers about ourselves. Alan is taken over by the mirror and tries to kill his family. Tim kills his father and is locked up in a mental institute. 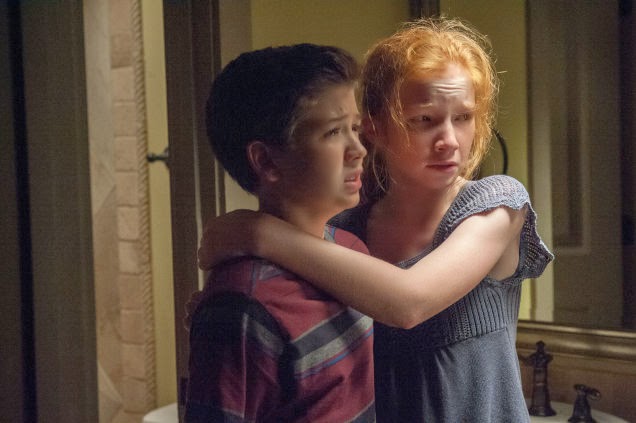 This film jumps back and forth, intermixing actions of today and the past. At times it can be a bit confusing and it takes a few seconds to calibrate what timeline you are watching. I think that might reflect the feeling of disorientation you get while being in the presence of the mirror. As a viewer I started to question my own sanity because I had no idea what was real and what was fake.

It’s incredible just how ultra-hideous the mirror is. I kind of think that anyone who makes the conscious choice of buying it almost deserves to die. Too dark? The mirror is very a creepy member of the cast. It embodies true evil. The mirror sneaks into your mind. It’s ever present, and it folds itself into reality and lies to you with the facts. The evil works its way into your mind seeping in around the edges until it permeates your thoughts. Not being able to trust your own perceptions and what you see makes you work harder to sort out what you are watching.

This movie started off as a short you can see it on Vimeo.

It has the look and feel of a reality show documentary. This film is written and directed by Mike Flanagan who has a long list of television work. What I like about this is the concept of someone trying to document the supernatural. It would be something that I would do if I were faced with something of supernatural power. His next movie, Somnia, looks interesting; in an interview with Den of Geek he has this to say about it.

“Somnia is fragile and hopeful and kind of beautiful at the end of the day. We would pitch it as a beautiful horror. It was really hard to compare it to something else so it's a risky movie, because I don't know how it will go over.”

With his work on this film I am going to be interested in watching what he has coming up. He has an excellent perspective on the genera. But do me a favor and please don’t make any sequels just to make them. I had better not see Oculus 5: The refleckoning that is a movie that would be scary on a completely different level, and not a good level.