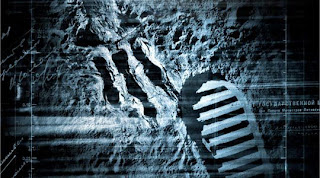 When they released the trailer and that picture I was pretty excited to see this film.  Hell if they encountered a monster in a rubber suit I think I would have enjoyed it more but overall I was disappointed by the film.

Plot:  Decades-old found footage from NASA's abandoned Apollo 18 mission, where two American astronauts were sent on a secret expedition, reveals the reason the U.S. has never returned to the moon. imdb.com/title/tt1772240/

They were really pushing the cover up  and conspiracy angle when promoting the film.  Even by having a supposed website of hours of footage from this mission that the film says was edited down to make this film.  If that was the case I wish they went back and reedited it and put some monsters or creatures in it and made the film scary.  Unfortunately the site is down now so I have no idea what was on it.  Maybe the government took it down.  Either way it worked for the publicity of the movie.

Let's start with some positives as the look of the film I thought was great.  All the cramped shots and the vast feel of when they were on the moon was well done.  Did they shoot it in the desert,on a sound stage or really on the moon?  I didn't even want to look the answer up because it makes it more impressive not knowing.  The acting did not lack either,Warren Christie was really good in his role.  I was also intrigued by what these astronauts were going through and dealing with on this mission. Especially towards the end when you realize that the government can not be trusted.  But didn't we know that already. 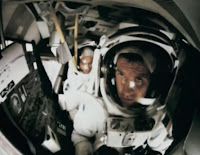 To me the plot kind of fell apart towards the end.  I don't believe this plays well as a horror film.  As a conspiracy film with some creepy elements yes that will work but as a horror fan the horror element was not there for me.  There were maybe 3 jump scares which you see coming so it was effective to some extent.  When we find out the reason that we supposedly stopped going to the moon a lot of viewers I think will become upset.  It is hard sometimes to come up with a scary creature or something in a film that makes the viewer really say holy hell that's insane.  So that part was a let down and then the movie to me copped out and went with a basic ending.

I would say that if you are looking for some sort of creature film or a film where they encounter something so disturbing that it will stay with you forever then this will not be for you.  If you like the conspiracy aspect and are more for the visual look and feel of this film then you will probably enjoy the film.

Source for trailer  youtube.com/ Machinima
Posted by Unknown at 1:17 PM