"When a successful country lawyer captures and attempts to civilize the last remaining member of a violent clan that has roamed the Northeast coast for decades, he puts the lives of his family in jeopardy."

I really don't know where to begin with reviewing "The Woman" because, although it's quite unlike anything that I've seen before, it's still somewhat derivative of a lot of other dysfunctional family stories in places.

With anything written by Jack Ketchum, you know it's going to be a little bit "out there" and, by having Lucky McKee direct it, it's likely to be even more so. Paradoxically, everything is extremely very well reigned in here and doesn't ever become bizarrely unrealistic or comical. I find that to be a very welcome and refreshing change.

Now as much as I want to say that "The Woman" is unique, it isn't. If you've ever seen "The X-Files" season one episode called "Jersey Devil" then the idea of a feral human being won't be much of a surprise to you. It was even done more recently in "Shiver", a Spanish film from 2008.

Demented, dysfunctional families aren't all that new either. You only have to look up "Spider Baby" (1968) to see how that all began. But, as I've said, "The Woman" is no comedy or, at least, not a comedy that I can categorise as one. It's amusing in places but there really aren't any major chuckles to be had out of it unless you are as sick and twisted as I am.

Combining the two elements by having a dysfunctional family kidnap a feral woman, and then to have their characters being further revealed by their interactions with their captive, is an ambitious idea which actually works fairly well. Of course there are flaws and quite a few moments which are too reminiscent of Dario Argento's "Jenifer" (from the "Masters of Horror" series) for comfort. 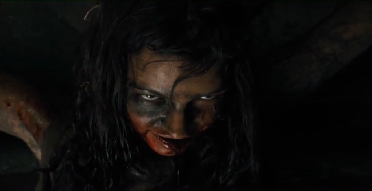 One thing which I'm puzzled over is whether or not "The Woman" is a kind of feminist movie or a totally misogynistic one. I wondered the same thing about Lars Von Trier's "Antichrist" (2009) although I gave up ever trying to analyse that director's mind a long time ago.

If I had to pick a side, I'd say "The Woman" is very feminist yet it shows misogyny in all its ugliness. I'll leave all the stuff about whether the message of the film is that women can only survive against men by reverting to their animal natures to people who actually give a damn plus I don't want to give away any spoilers.

For me, the nudity, torture and gore are far more important when rating a horror movie plus the effect that the characters have on me. "The Woman" isn't the most brutal movie that I've ever seen but the effects are certainly worthwhile and the acting is pretty decent too.

Angela Bettis stands out (as she always does when directed by Lucky McKee) but Sean Bridgers isn't too shabby either. Think of "The Stepfather" (1987) but take it up several notches and you have Chris Cleek. Although none of the characters are very much more than caricatures, it's how the full extent of their relationship is slowly revealed that makes the drama so engrossing.

The star of the whole thing though is, of course, Pollyanna McIntosh as the nameless feral woman. She may not look as pretty here as she did in "Exam" (2009) but she certainly knows how to pull off a purely animal look. Getting to see her completely nude is a bonus too.

Neither Pollyanna McIntosh or Angela Bettis are the best looking women in this film though. That honour belongs to Carlee Baker whose acting, unfortunately, is so bad that she can't even pronounce her own character's name properly. You never know with Lucky McKee so the bad acting and mispronunciation may well be intentional.

If you've already seen "The Girl Next Door" (2007), "The Lost" (2006) or "Offspring" (2009), Jack Ketchum's style will be quite familiar. Although I don't think that "The Woman" is nearly as controversial as any of those, it still continues the same style of dealing with taboo subjects in a more horrific format than some people will be used to.

You can read as much or as little into "The Woman" as you like but it won't change the fact that it's an immensely satisfying experience.