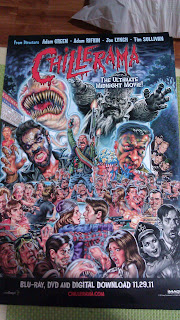 Well first things first as you can see in the poster the Blu-Ray, Dvd and Digital Download is set to come out November 29th 2011 so if you can not see it in the theater you will get a chance soon.  So for the midnight showing there was a good sized crowd, Director Joe Lynch and Kristina Klebe who starred in the Diary of Anne Frankenstein short was in attendance to watch the film with the audience and also Lloyd Kaufman was in attendance as well so it already was starting off great and we didn't even get to see the film yet.  Joe Lynch introduced the film and talked a little about how himself and the other directors got together and talked about how they miss exploitation type films and actually going to the theater or drive-in and seeing these films on the big screen with actual audience reactions.  So the idea was set in motion, hit a hiccup to get funding, got some funding and bam they went with it and made this film happen.  I will say that what they created is fun,over the top, wrong on a bunch of levels and I absolutely loved it. 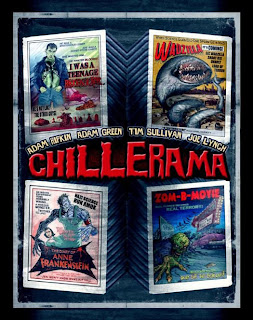 Synopsis:  It's the closing night at the last drive-in theater in America and Cecil B. Kaufman has planned the ultimate marathon of lost film prints to unleash upon his faithful cinephile patrons. Four films so rare that they have never been exhibited publicly on American soil until this very night! With titles like Wadzilla, I Was A Teenage Werebear, The Diary of Anne Frankenstein, and Zom-B-Movie, Chillerama not only celebrates the golden age of drive-in B horror shlock but also spans over four decades of cinema with something for every bad taste.   imdb.com/title/tt1727252/


Now actually Zom-B-Movie is the wrap around film so the actual first part that leads up to the drive in and after every short film shown we are taken back to the characters watching these films is part of Zom-B-Movie.  The actual last film that was supposed to be shown was Deathication introduced by Fernando Phagabeefy (Lynch) which is literally a shit filled masterpiece when the film gets eaten up then the Zom-B-Movie invasion fucking (seriously) begins.
Wadzilla:  It has the classic 50's monster invading a city look and feel down pact.  It just so happens that the creature attacking New York is a giant mutated sperm.  A man who has a very low sperm count starts to take special pills(which happened to be next to a radioactive canister) to strengthen the sperm he does have and well as you can probably guess from the title, leads to a huge load of a problem to say the least.  The acting,look and story was great.  Definitely funny and all the innuendo in the short was perfect and you have to listen to catch all of them.  If you don't mind semen this one has you covered.

I Was A Teenage Werebear:  This short mixes your beach surfer party films with a little Lost Boys vibe in it.  But just imagine if in Lost Boys David was trying to get Michael to let his inner gay Werebear out then this would be that movie.  You have some musical numbers, male on male wrestling and of course your werebears.  Again the key to all of these shorts are the the twist these directors did to the classic schlocky exploitation films of the past.  The only problem I had with this short was that the pacing is slower then the other shorts.  So after the beginning and Wadzilla it feels like you hit a speed bump.  But the overall story and innuendo is still there and I found it to be hilarious.

The Diary of Anne Frankenstein:  Now for myself and I believe a lot that see this movie this short steals the show.  It is so well done and so damn hysterical.  I can watch it a million times and laugh just as hard every single time.  The main catch is that the actors actually speak German in the short and their words are subtitled.  However Joel David Moore who plays Hitler knows no German and only speaks gibberish but his subtitles are real sentences.  Listening to all the things he says is great and you can actually here some familiar words or people names, see how many you can catch.  The acting in the short is fantastic all around, Joel David Moore, Kristina Klebe, Kane Hodder, the nazi soldiers, the Frank's everyone does a great job.  I feel that some of the best scenes are in this short.

Deathication/Zom-B-Movie:  Like I said before Deathication was supposed to be the last film which is a shit filled splatter fest but gets interrupted and we go into the end of the wrap around film Zom-B-Movie.  The line that's said in the trailer "When there's no more room left in Hell the dead shall fuck the earth" pretty much let's you know that this last short will be a zombie orgy that you will definitely not forget. If The Diary of Anne Frank had some of the best scenes that I watched this short doesn't let that momentum slip and also throws in some of the most famous and memorable one liners from movies past and adds them to a whole new context for everyone to enjoy.


Also don't forget to stay for the credits and you will be entertained a little by each film again.
I would say that anyone thinking about seeing this film see the trailer.  If you don't find it funny then you will probably not like the film.  However if the trailer tickles your fancy then you will be in for a great ride of fun,debauchery, semen,shit,cleavage,sexual innuendo,blood and whatever else that you can think of and it's in this film.


2nd chillerama poster obtained from:   geektyrant.com
Posted by Unknown at 11:15 AM