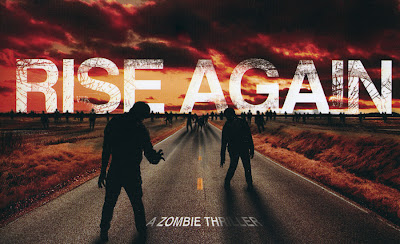 The Walking Dead television series gave me a new-found appreciation for the zombie genre, so I decided to give a zombie novel a try. After searching around Amazon, and reading a few reviews, I settled upon Rise Again, by Ben Tripp, and fortunately, I wasn't disappointed.

The story centres around Danielle (Danny) Adeleman, an Iraq War veteran and sheriff of small American town, Forrest Peak. During Fourth of July celebrations, a mystery contagion spreads through the town leaving the population of locals and visiting tourists decimated within hours.  When the deceased begin to rise again and attack the living, Danny takes on the responsibility of a small band of survivors and flees the town, only to discover that nowhere is safe from the ravenous walking dead.

Okay, so the basic premise is pretty familiar zombie apocalypse fare, but it's the strong characters that really take this story to the next level. A warrior and natural leader, Danny is also a functioning alcoholic, scarred both physically and emotionally by her time in combat. She's not instantly likable, but the way she tenaciously faces each soul-crushing trial, while at the same time searching for her missing sister, and attempting to protect those in her charge, made me care about her despite her faults. It was also interesting the way the book focused on Danny's military mindset and her constant need to create some kind of order amidst the anarchy.

Danny's little band of survivors are also engaging, and satisfy the most important requirement for any horror tale in my opinion, and that is, you really want them to survive. Some of these supporting characters, like a gay interior designer from Los Angeles, and a town drunk, could so easily have been stereotypes, but the author peeled away the superficial facades and created real human beings who quickly became my favourites. In many ways, the novel is primarily about the manner in which a broken society brings out the best and the worst in humanity. The most unlikely characters emerge with extraordinary nobility, while the actions of others are in fact far more disturbing and monstrous than the zombie threat.

Great characters aside, Rise Again is ultimately a zombie apocalypse novel, and as such, it also contains plenty of the requisite violence, gore, and scares that the zombie genre demands. The sights, smells, sounds, and tactile sensations are vividly described, and the pace is excellent with plenty of nail-biting tension but just the right amount of respite between the big horror set pieces. Plus, without giving anything away, there is a stunning cliffhanger of an ending, and happily, from what I understand, a sequel is on the way. This book would have made a great television series if The Walking Dead hadn't got there first.

Rise Again is available here.
Posted by Little Gothic Horrors at 6:22 AM