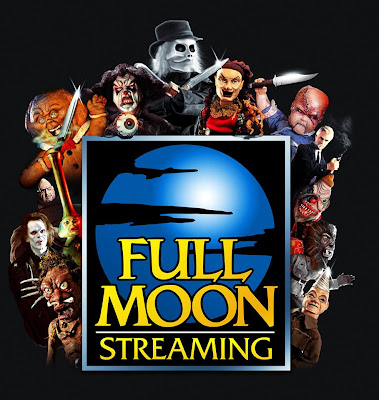 LOS ANGELES, CA, August 7, 2013 –Full Moon Features is proud to announce the world premiere of brand new subscription-based video streaming service, FULL MOON STREAMING (www.fullmoonstreaming.com), which will be home to the entire Full Moon Features library; including brand new world premieres and resurrected film treasures, from the convenience of a computer or mobile device. FULL MOON STREAMING is one of the world’s first and finest interactive video experiences, and will provide fans with unprecedented access to exclusive content: webisodes, behind-the-scenes footage, Full Moon merchandise tie-ins, contests, and much, much more. Viewers who watch closely will be rewarded as they seek out the hidden interactive elements built into the very fabric of the films.

For only $6.99 per month, subscribers can stream titles directly and instantly on all devices, allowing them to watch their favorite films anywhere, at anytime. A mobile-friendly version is optimized for iPhone, Android, iPad, and tablets that is nearly identical to the desktop version. Titles include such cult favorites as Band’s Puppet Master series, Subspecies, and Demonic Toys. Plus the lost Trancers sequel will premiere as part of a three part anthology known as Pulsepounders, including a sequel to cult favorite The Dungeonmaster, which was shot in 1988 and never released until now. FullMoonStreaming.com will be interactive in ways that fans have never seen before, including opportunities to bring home items featured on screen and see rare exclusive extras.

“The fans speak, and we listen,” explained Charles Band, legendary founder of Full Moon Features. “I’ve been asked for a comprehensive Full Moon digital universe for eons, and now the technology has finally caught up to what I had envisioned. Fans will now have the ability to totally engage and immerse themselves into our Gonzo universe, and witness the world’s most beloved film treasures in the comfort of their own homes.”

Also on tap for Full Moon is a new acquisitions label as part of the streaming site, to showcase the work of upcoming filmmakers. “I see so much young talent out there with such a dearth of distribution,” continued Band. “At Full Moon, we have a full-scale distribution arm including home video (DVD and Blu-Ray) and on-demand access, and we’d like to give these aspiring filmmakers a chance to show their stuff on our site, and keep it in the Full Moon family.”

Subscriptions will be $6.99/month, including unlimited viewing.

Charles Band founded MEDA Home Entertainment in the late 1970’s, one of the first independent video distribution operations in America. With the foresight that home video was the future, a vision few others shared, he helped pave the way for the colossal home video boom to come. In the 1980’s, Band produced such hit cult favorites as Ghoulies, Re-Animator, The Dungeonmaster, Dolls, Troll, Robot Jox, and many more.

Band founded Full Moon Features in 1989 following the early 80’s success with Wizard Video, which released such cult classics as Zombie 2, The Texas Chainsaw Massacre, and I Spit on Your Grave on VHS. Wizard video was celebrated for their shocking and incomparable box art, especially after their switch to the "big box" format.

Band soon teamed with Paramount Pictures and Pioneer Home Entertainment for direct-to-video releases on VHS and Laserdisc. With upwards of twenty releases per year, Band has also built a reputation as a prolific and frequent director of entertaining low-budget genre films. In all, Band has produced almost three hundred features variously delving into the realms of horror, sci-fi, fantasy, and family films under its Moonbeam Films label.

The Puppet Master series is considered to be Band’s most celebrated and popular franchise. The latest installment, Puppet Master X: Axis Rising, is the 10th film of the most successful direct to video horror franchise of all time. Full Moon has created many other well-known franchises such as the Trancers series, starring Helen Hunt and Tim Thomerson, the Subspecies series shot on-location in Transylvania, Romania, as well as Dollman, Demonic Toys, Killjoy and The Gingerdead Man (starring Gary Busey as a killer cookie!). Full Moon’s recent releases include the Blaxploitation horror film Ooga Booga starring veteran actors Karen Black and Stacy Keach, the Blu-ray release of the critically acclaimed vampire series Subspecies, and two new grindhouse releases including Riot in a Women’s Prison and SS Hellcamp.

Full Moon titles can be found at all major video retailer outlets, Red Box, and Netflix. Full Moon films are distributed in North America on Pay Per View and Video on Demand, including Comcast, Time Warner, and AT&T U-Verse. Full Moon movies are also available from sources as diverse as Walmart, Amazon, iTunes, Prescreen, and FlixFling. In addition to feature films, Full Moon is also very active in creating and marketing a wide variety of merchandise including original action figures, resin statues and 1:1 scale replicas of its better-known puppets and dolls.
Posted by Dr Blood at 3:59 PM